The Kõits people also known as Sunuwar in exonym are unique indigenous population of the Kiranti peoples of eastern Nepal viz. Molung, Solung, Yolung, Likhu and Khimti rivulet areas. Their indigenous linguistic, anthropo-sociological and religio-cultural identities are as follows briefly.

Linguistically, Kõits is one of the Kiranti languages of eastern Nepal viz. Hither, Central and Far Kirant (as shown below) classified in the Sino-Tibeto-Burman family of languages in linguistic atlas of the world. Although there are several glossonyms, Kõits is the only valid indigenous glossonym for the language spoken by some thousands of speakers. It is one of the dying out languages in the Red Book of endangered languages of the world. Many foreign scholars and British Gurkha Officers spell the glossonym and ethnonym as Sunwar or Sunuwar parallel to Bhujuwar, Pirthwar, Kuswar, Kalwar, Dan(u)war, Panwar, Ku(a)nwar, Pawar, Putuwar, Talwar, Sarwar, Anwar, Natwar, Pesawar, Jheewar, Senuwar, Tanwar, Newar, Mukhi(y)a etc are all Indo-Aryan terms which do not reflect indigenity of the Kiranti-Koits people and the language speakers.

In anthropological studies, the Kiranti-Kõits people are classified in Mongoloid stock as shown in the following figure. However, one cannot claim 100% Mongoloid mtDNA in their blood in this diverse modern world today. Therefore, some groups and individuals might have developed non-Mongoloid features due to cross marriages.
Available literature often refers to them as the Indo-Mongoloids or ‘the people of Mongoloid stock’ (cf. Chatterji 1974: 20 [orig. 1951], Debnath and Chaudhuri 2006)inhabiting the Indian subcontinent especially densely populated in the North East including Western parts of India and Nepo-Mongoloids inhabiting in the Nepal Himalayas and the hills from east to west in general and particularly in the eastern hills.
Regarding the Mongoloid tribes Chatterji (ibid.) paraphrasing from Grierson’s Linguistic Survey of India notes that they “represent at least three distinct physical types- the primitive long-headed Mongoloids, who are found in the sub-Himalayan tracts, in Nepal and mostly in Assam; the less primitive and more advanced short-headed Mongoloids, who are found mostly in Burma (now Union of Myanmar) and have expanded from Burma through Arakan into Chittagong; and finally the Tibeto-Mongoloids, who are fairly tall and have lighter skins and appear to be the most highly developed type of the Mongoloids, who came to India. These Tibeto-Mongoloids are the linguistically characterized Tibetans and their various off-shoots who arrived in India through the Himalayas, in comparatively recent times, spreading from

Bear in mind that if you analyze your paper, your principal task is to make certain that your audience understands the significant points without a lot of difficulty write my paper. Likewise you have to adhere to exactly the same theory in your essay. So if you’re trying to find a professional writer to complete paper assignments or simply to provide you a list of superior essay topic tips for your paper we can do it all. Our essay services will guarantee that you compose a wonderful scholarship essay. What’s more, you also learn to balance an essay. Also some very best essay writing service is having good customer care team.

Bhotan and Sikkim to Ladakh and Baltistan. Additionally, their calendar Yalambā यलम्बा (also Yele येले) Thotse थोचे (also Yele येले Dong दोङ some other local names may vary) 5069 (2009 AD) confirms them as one of the most ancient Indigenous peoples of the Himalayan region including Sikkim or West Bengal and its vicinity. Some can be found in Uttaranchal and in other parts of Uttar Pradesh, Assam, Meghalaya and Nagaland too.
In the past their life style was mostly nomadic like any other neighbouring tribes before the advent of the age of agriculture. They preferred dwelling on the Himalayas and rugged hills, river valleys, caves and jungles for easy hunting and food gathering. Till today traces of hunting practices can be found amongst them in isolated areas. Some of them have adopted their title as Sikari ‘hunting expert’ Sunuwar also. To some extent, their preferences of living seem discrete and aloof irrespective of their joint family system. Their linguistic history is very closely related to the Kiranti-Bayung people and distantly with Kiranti-Wambule and Thulung people. Ethnofolklore of the Kiranti group, viz. Kiranti-Bayung also claims their separation from each other in their nomadic stages of migration.
Some history books written on South Asia particularly Nepal claim that Kirant(i) people had ruled the Nepal valley for more than 32 generations immediately after Gopala ‘cow hoarder’ and Mahispala ‘buffalo hoarder’ tribes. The Hopo ‘king’ Yalambar (see plate 1) is believed to be their first legendary king and Jite Dasti the last one. However, archaeological evidence has not yet been found because of the lack of academic research and investment on them. Some ethnological, ethnographic and linguistic studies on at least more than two dozen linguistically interrelated groups of Kiranti speakers have shown that they are very plural like the Naga people. Some ethnofolkloric narratives also can be found on their relationships between the Kiranti and Naga people.
Other local folklores in Kiranti-Bayung narrate the groups’ migrations and splits to each other in different periods on different directions of their tribal oral history. And they are famous for their Mundum ‘oral religious text’ amongst them as their history is still unwritten.
Like their different local folklores, there are some other versions of sketches available of their first Hopo Yalambar. However, the one in plate 1 produced here is the first sketch available in several web pages related to the people today known as Sunuwar (exonym, Surel also), Rai (exonym; also Jimi or Jimee), Limbu (Yakthung, Tsong) and Yakkha (Dewan, Jimee or Jimi, Majhiya exonyms) in modern terminologies. These terms quite often have political implications for the ancient Kiranti people of the Himalayas and its surroundings, so to speak. Thus, their glorious past till today is still unknown to the rest of the world.

Their religio-cultural identity rests on Mugdum as shown in the following figure. TheMugdumd’Ub’d or Mukdumd’Sb’d is their main religious texts transmitted from one generation to the other orally and not necessarily found in written form. However, they have started to document their sacred texts in written forms as well these days by utilizing the available computer technology. Yet most of the tribal religious experts have a common belief that such Mugdum texts are very sacred and therefore should not be written because if in case one malpractices or found to be incomplete one has to undergo long lasting troubles in his or her family.
Their Mugdum text in its best form is recited via Salākuसलाकु (also Salākसलाक in spoken form) like Risiya. It is an oral-religious and sacred text of the Kiranti-Kõits ethnoindigenous people of Sikkim and elsewhere. The Salāku text is generally referred to as Mundhum or Mugdum, an umbrella term for the religious practices of Kirant(i) people(s) such as the Sunuwar (exonym, Surel also), Rai (Jimee, Jimi exonyms), Limbu (autoethnonyms: Yakthung, Tsong) and Yakkha (similar four in the post-1990s’ movement in Nepal, linguistically one Kiranti family). In another sense of the term, Salāku is a series of sacred mantras or formulae performed by the Põib(o)पोँइब(ो)’shaman’ (see plate 6) and the Na:soनाःसो (also Nhā:soन्हासो in ideolectal and geolectal varieties) ‘priest’. Salāku has different underlying meanings when conducted by these two different religious practitioners or social agents in the Kiranti-Kõits

Other than facts on the write my paper opposite side, the reader want to learn about thoughts, ideas and your personal opinion about the topic. If you purchase from us, you can find a draft of your paper to be sure your writer is currently heading in the correct direction. The questions which you are currently using for your research’s aim has to be included in your research paper outline. So it truly is possible to acquire an essay today! There are tons of companies who offer you to procure the pre written documents on your topic so you may use it like a sample, however you maynot use any sentence since it is going to appear plagiarized straight away. Therefore you have arrived

When you’re looking for the best essay writing service out there, you have a lot of different choices to consider. And even though it can be tempting to choose the first service that seems right, about ways to actually go about finding the ideal, you want to think. In this piece, I will let you know exactly what you should do so as to find the service which can assist you with your writing needs. I will also give you essay writer some suggestions on what you need to search for when choosing the best.

at the spot! You have to make certain your paper is uninstalled and edited properly. Because of the from using our services, you will be provided a custom-written paper you’ll be able to use for your purposes.

community. While the Põib(o) can conduct Salāku in the form of mantras, the Na:so conducts Salāku in the form of pidār-naamdārlपिदार–नाम्दार ‘prayer’. The latter usually occurs during seasonal festivals such as Shyãdar Shil or generally translated as Chandi Nach (Nep. ‘Chandi dance’) but not necessarily the Hindu Chandi as such in translation.
Salāku is most probably one of the most ancient Kiranti-Kõits ritual-texts amongst trans-Siberian shaman cultures. The Kiranti-Kõits are one of the ethnoindigenous tribes within the Kiranti linguistic communities, and that their religious, cultural and linguistic identity is reflected and preserved in Salāku. Although there is no accurate recorded history of the Kiranti-Kõits people in Nepal or elsewhere (cf. Egli 1999), how they have transmitted Salāku is completely orally since the dawn of Kirant(i) civilization in the Himalayas. At present, it is an important piece of the national heritage of the country/state and is threatened with extinction in the adverse religious ecology of proselytization. 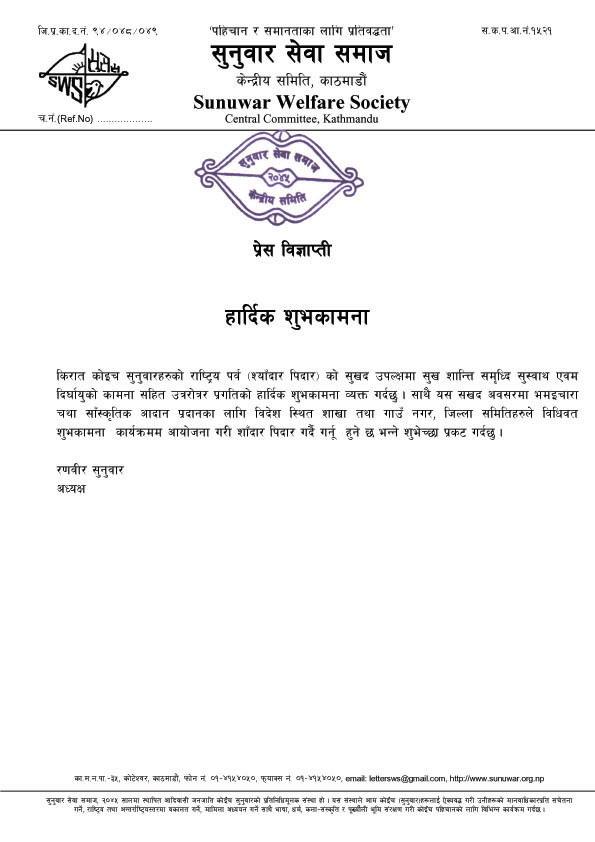